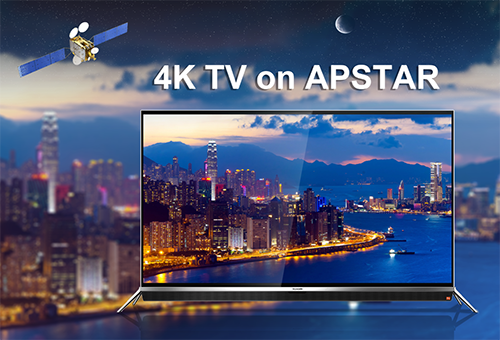 Amsterdam, 15 September 2017 – APT Satellite Company Limited (APT Satellite) and Telekom Austria Group (TAG) inked a satellite capacity agreement to broadcast channels from the APSTAR-7 satellite at 76.5E. After a couple of months test run on APSTAR-7 satellite, a bouquet of 13 channels including a 4K channel using HEVC encoding started broadcasting on APSTAR-7, being uplinked by Telekom Austria Group’s own earth station Aflenz in the Styrian Alps.

“APT Satellite is pleased to cooperate with TAG. And we are interested at broadcasting a 4K channel from one of our satellites. APT Satellite is expecting the cooperation can boost European TV’s viewership in Asia, meanwhile increase the popularity of 4K TV in this part of world.” said Huang Baozhong, Executive Vice President of APT Satellite.

“We are excited to work with APT Satellite – the fastest growing satellite operator in Asia. With this unique cooperation, we have now built a bridge between Europe and Asia, aiding the European broadcasters to enter and pursue growth into the expansive Asian market. We are optimistic about the fast adoption of 4K content in Asia and proud to broadcast one of the first 4K channels for this territory.” said Stanislav Georgiev, Head of Media Broadcasting, Telekom Austria Group.

The TV platform is available throughout Asia Pacific region, South Asia, Middle East, most part of Europe and Africa by its operation on APSTAR-7 satellite.

Telekom Austria Group, listed on the Vienna Stock Exchange, is a leading provider of digital services and communications solutions in Central and Eastern Europe with more than 24 million customers, currently operating in seven countries: Austria and Slovenia (A1), Bulgaria (Mobiltel), Belarus (velcom), Croatia (Vipnet), the Republic of Serbia (Vip mobile) and the Republic of Macedonia (one.Vip).

Based in Hong Kong, APT SATELLITE COMPANY LIMITED (“APT Satellite”) is a satellite company operating a fleet of five satellites, namely APSTAR-5, APSTAR-6, APSTAR-7 and APSTAR-9. APSTAR-5C and APSTAR-6C are currently under construction, they will replace APSTAR-5 and APSTAR-6 respectively in 2018. The footprints of the fleet cover Asia, Middle East, Oceania, and most part of Europe and Africa, extending services to over 75% of the world’s population. Currently distributing 600+ TV channels around the world including HBO, Disney, Sony Pictures, NBCU, RTL-CBS, EBU, GMA, TVBI, TVn, Celestial Tiger etc, APT Satellite is also supplying transponder capacity to a variety of DTH platforms, as well as to media networks for video contributions across the world.