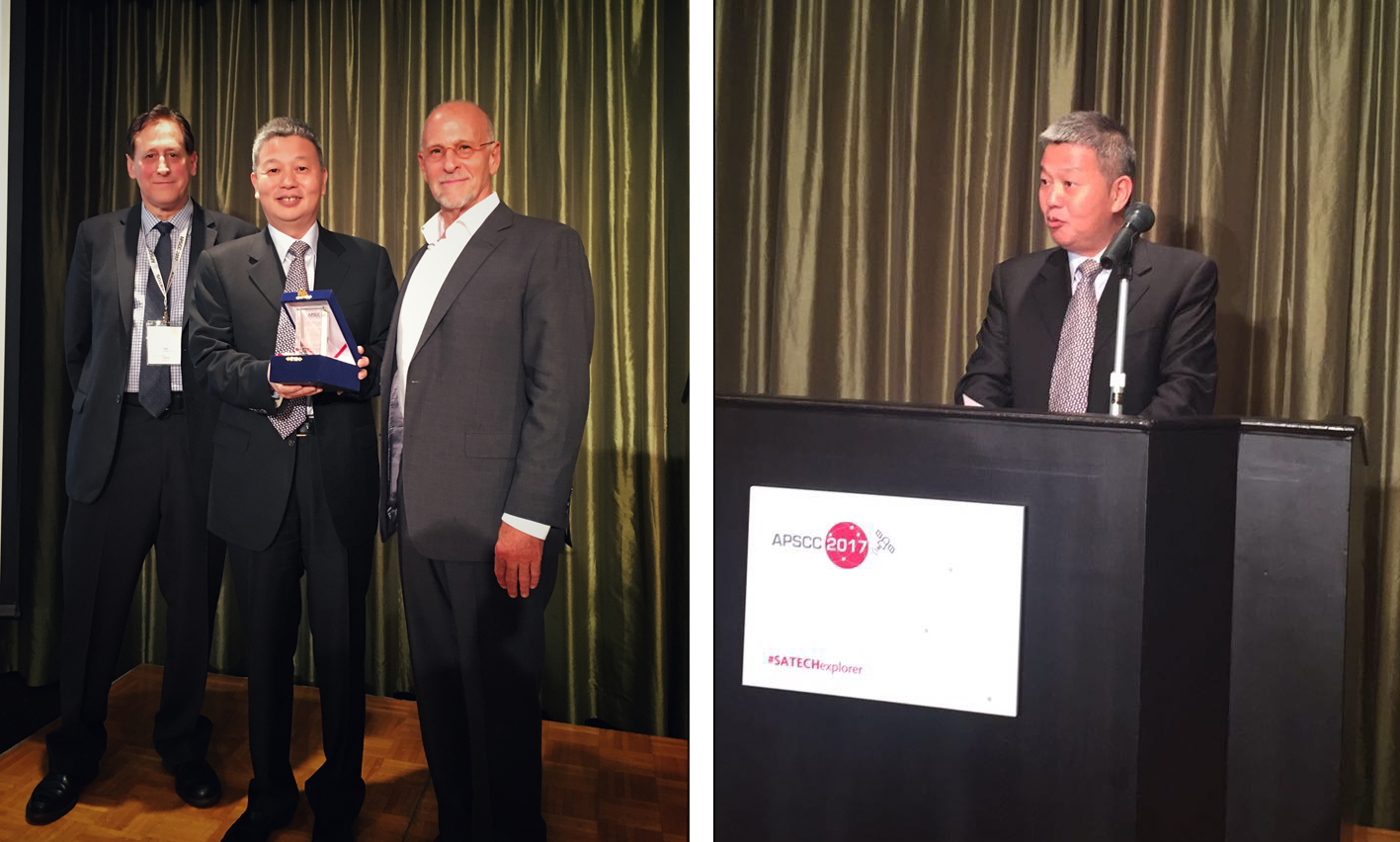 Tokyo, 10 Oct 2017 – Asia-Pacific Satellite Communications Council  (APSCC) announced today that it named Mr.Cheng Guangren as the ‘Satellite Executive of the Year’. APSCC is the largest and most influential organization in satellite industry in Asia Pacific. Its Award Committee is the leading international awards organization honoring outstanding organizations and individuals for their collaboration, guidance, support and contribution to the industry.

Since Mr.Cheng was appointed as the Executive Director and President of APT Satellite Company Limited (APT Satellite) in June 2008, his leadership has directly resulted in the outstanding performance of the company. During 2009-2017, APT Satellite totally purchased 9 satellites, including 6 new satellites namely APSTAR-7, APSTAR-7B, APSTAR-9, APSTAR-5C, APSTAR-6C and APSTAR-6D, and three in-orbit satellites namely APSTAR-2R, APSTAR-9A and one for orbital slot bring-into-use. Meanwhile, APT Satellite has continuously achieved brilliant financial performance, with revenue CAGR at 11.8% in 2009-2016. Especially for the year 2016, given the global satellite industry slowed down, APT Satellite still recorded positive result in revenue and EBITDA, while the leverage ratio keeps at low level of 25%.

“I entered the Fixed Satellite Operation industry in 1992. Over the past 25 years, I have worked for SINOSAT，CHINADBSAT ，CHINASAT and APT Satellite. I get this honor today, not only for my work in APT Satellite, but also for my long-term dedication in the satellite industry,” said Mr.Cheng upon accepting the award. “Today, the industry has entered into a decline cycle, and we are facing new challenges and pressures again. I am still confident with the industry, specifically the Fix Satellite Service (FSS). I firmly believe FSS has a bright future and will continue to be the leading power in the satellite Industry. I and my team will continue to work hard to meet the challenge and embrace the future!”

APSCC (Asia-Pacific Satellite Communications Council) is a membership based non-profit international organization representing all sectors of satellite and space-industries including satellite service providers, manufacturers, launch service providers, risk management companies, broadcasters, and government organizations. APSCC membership is open to any organization involved in the satellite industry with interests in the Asia-Pacific. The overall objective of the APSCC is to promote communications and broadcasting via satellite as well as outer space activities in the region through conferences, forums, workshops as well as exhibitions. For more information: www.apscc.or.kr

Based in Hong Kong, APT SATELLITE COMPANY LIMITED (“APT Satellite”) is a satellite company operating a fleet of five satellites, namely APSTAR-5, APSTAR-6, APSTAR-7 and APSTAR-9. APSTAR-5C and APSTAR-6C are currently under construction, they will replace APSTAR-5 and APSTAR-6 respectively in 2018. The footprints of the fleet cover Asia, Middle East, Oceania, and most part of Europe and Africa, extending services to over 75% of the world’s population. Currently distributing 600+ TV channels around the world including HBO, Disney, Sony Pictures, NBCU, RTL-CBS, EBU, GMA, TVBI, TVn, Celestial Tiger etc, APT Satellite is also supplying transponder capacity to a variety of DTH platforms, as well as to media networks for video contributions across the world. For more information: www.apstar.com